This past summer, a blog by Matthew Block at First Things (http://www.firstthings.com/blogs/firstthoughts/2013/07/12/president harrison-the-lcms-and-ecumenical-dialogue/) noted that the LCMS under President Matthew Harrison’s administration has actively pursued conversations and developed good relationships with the leaders of other Christian traditions both here in North America as well as around the world. This is a very good thing!

Hopefully, these initiatives do not come as a surprise to anyone. After all, our Lutheran Confessions have bequeathed to us an “ecumenical obligation” (Robert Kolb) to engage in conversations with other Christians in order to remove stereotypes of each other, clarify our confession, cooperate where we can, and work toward resolving long-standing disagreements for the sake of the church’s witness in the world. And so it is heartening to see such conversations and developing relationships taking place with other churches.

The twentieth century has at times been called an ecumenical century given the formation of the World Council of Churches, the National Council of Churches, the Lutheran World Federation, not to mention the bilateral dialogues among numerous churches and the resultant joint statements, declarations of church fellowship, and at times, the mutual recognition of ministries. And following Vatican II, Rome took the lead in initiating many bilateral dialogues—including with Lutherans—that have spanned more than thirty years.

But conservatives often felt that the agreements reached compromised the truth, or that churches simply agreed to disagree. Now, however, we are witnessing a seismic shift in the Christian landscape resulting in realignments of churches around the world (see 2013 LCMS Convention Workbook, p. 9). Much of it is due to differences over first article moral and social issues (abortion and bioethical issues, sexuality and marriage, to name the most prominent ones) which have moved to the forefront of the culture’s attention.

In our own country, we have seen a split within the Episcopalian church leading to the formation of the Anglican Church in North America (ACNA) and a split within the ELCA leading to the formation of the North American Lutheran Church (NALC). In Africa, the Ethiopian Evangelical Church—Mekane Yesus (EECMY)—one of the fastest growing Lutheran churches (over six million members), broke fellowship with the Evangelical Lutheran Church in America (ELCA) and the Church of Sweden. Again, these events took place in part over taking the Bible at face value when it comes to issues of human life, sexuality, and marriage.

During the past three years we have witnessed renewed vigor by the Lutheran Church—Missouri Synod in pursuing conversations and cultivating good relationships with other church bodies such as the new Anglican Church of North America (ACNA) as well as the North American Lutheran Church (NALC). In fact, the leaders of these churches (including the Lutheran Church—Canada) recently adopted “An Affirmationof Marriage: An Ecumenical Statement” (http://www.canadianlutheran.ca/an-affirmation-of-marriage/).

On the international scene, the International Lutheran Council (ILC), of which we are a part, has broached the possibility of opening up a dialogue with Rome. In addition, “a mutually beneficial relationship has developed” (2013 LCMS Convention Workbook, p. 86) between the LCMS and the EECMY in Ethiopia. Our church body has responded to requests for assistance in matters related to confessional Lutheran identity and the need for theological education (see Convention Workbook, p. 20; see also pp. 84–87, 20–24, and 9–10).

We live in an exciting and uncertain time as the Christian landscape shifts before our very eyes. Thus it is fitting in this issue of the Concordia Journal that we reflect on what has taken place up to this point and where things are going as seen through the eyes of those outside the Lutheran Church—Missouri Synod. In a sense, this issue provides some context for what is happening in the one, holy, catholic, and apostolic church and for how the LCMS is finding a wider place at its table. In a future issue, we hope to provide a glimpse of where things are going and the possibilities that lie ahead as seen through the eyes of those within our confessional tradition or connected to our tradition.

The Reformation ushered in a gospel-centered confessional movement that reconfigured the Christian landscape of the sixteenth century. Faithfulness to that Lutheran Confession continues in such ecumenical witness and conversation.

Light from Above, Laser Our Hearts
Dale Meyer 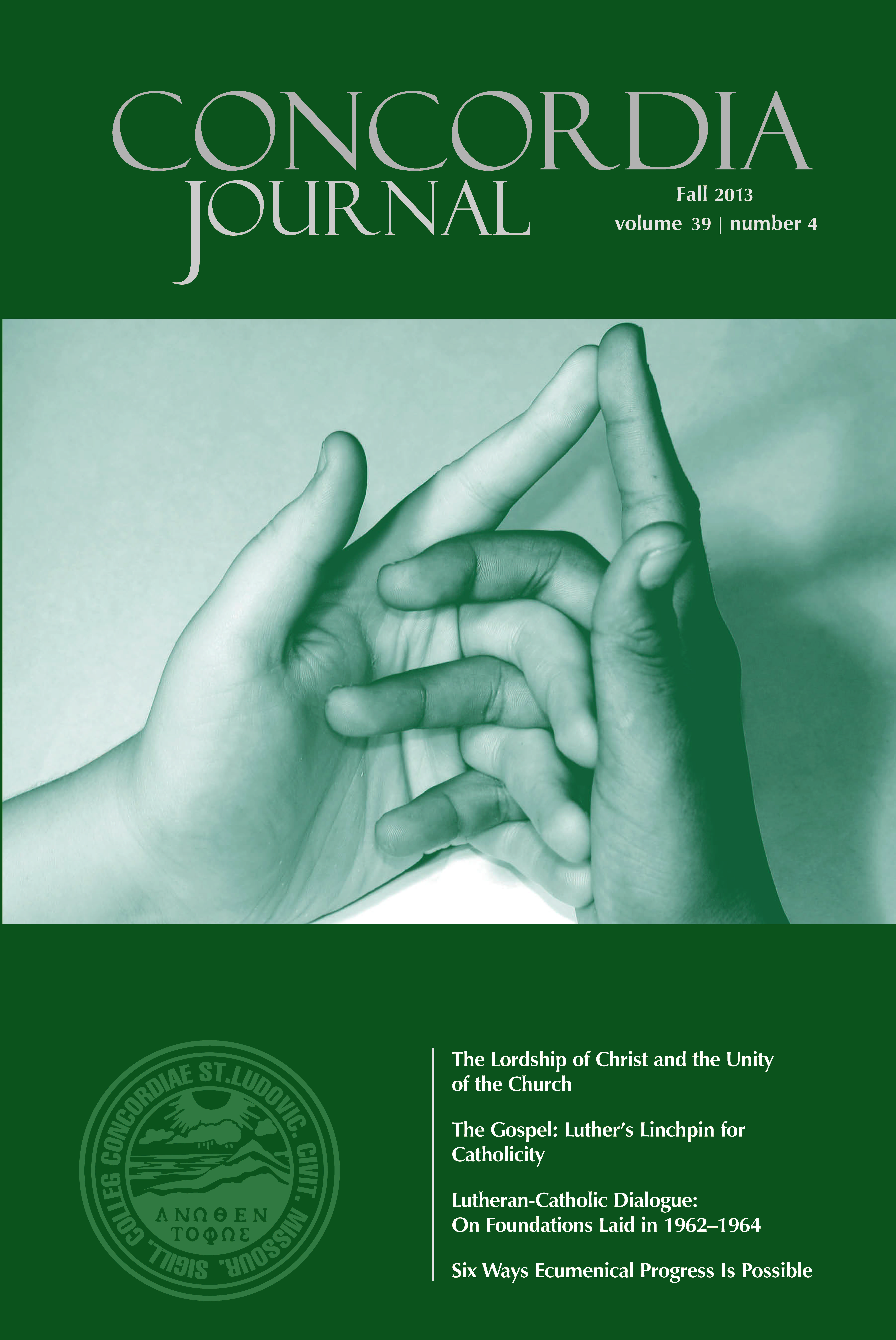